Weight Management and the DUTCH Test

Weight Management and the DUTCH Test 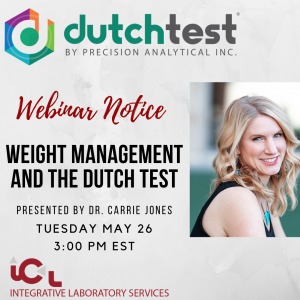 According to the Centers for Disease Control, 42% of Americans are considered obese. Public Health of Canada reported in 2017 that 64% of Canadians over 18 years of age are overweight or obese. Interestingly in 2013, the Mayo Clinic published a study that showed the top 10 reasons people visit their doctors, 6 out of the 10 can be linked to excessive adipose tissue including joint pain, back problems, hypertension, diabetes, disorders of lipid metabolism and mental health. Armed with this knowledge, practitioners need to understand the role that sex, and adrenal hormones play in weight management, energy expenditure and cravings. In addition, the hormones on the DUTCH test will be discussed in view of other important hormones such as thyroid, insulin, leptin and more. Finally, perimenopausal weight gain will be reviewed due to its seemingly sudden appearance in a woman’s 40’s as she begins her transition. Objectives: At the conclusion of the webinar, practitioners will be able to: 1. Identify key sex hormones and the role they play with weight loss, energy expenditure and cravings. 2. Discuss the role of androgens and its importance to muscle 3. Discuss the role of estrogens and its relation to the adipose cells 4. Identify how cortisol and the catecholamines affect adipose tissue and brown fat 5. Understand why perimenopausal women tend to gain an extra 10-20lbs 6. Develop a personalized treatment plan for DUTCH results based on examples